Des Moines, Iowa (January 2022) - The Iowa State Bank Board of Directors had the distinct honor of installing Lauren Burgeson as the President of Iowa State Bank at their January 18th board meeting. Burgeson is the first woman to hold this position at Iowa State Bank.

“I am honored to continue my dad’s legacy and lead Iowa State Bank into the future,“ said Burgeson.

Burgeson is a Des Moines native and graduated from Roosevelt High School before attending Miami University in Ohio, graduating with a Bachelor of Sciences Degree in Business. She also graduated from the Graduate School of Banking in Madison, Wisconsin.

“This is the culmination of her many years of service to the bank and diligent preparation over the past few years for this responsibility. She has a good solid values system from which she leans on in making decisions. Her leadership style is one of quiet humility and high level of sincerity and empathy for other’s needs.” said outgoing Bank President Al Gross who will remain CEO of Iowa State Bank.

Following in her’ father’s footsteps, Burgeson is very active in the community, currently serving on the Boards of EMC National Life Company (since 2018) and Chrysalis Foundation (since 2016). She was recognized as a Business Record “Forty Under Forty” in 2019.

Iowa State Bank, opened in 1941 and just celebrated 80 years of serving the Des Moines area. With 5 convenient metro locations offering full service banking plus a Trust & Wealth Management department and ISB Investment services, Iowa State Bank is uniquely positioned to serve the needs of our customers in Central Iowa. The bank currently has over $500 million in assets and $1.8 billion in assets under administration in the Trust & Wealth Management Department. 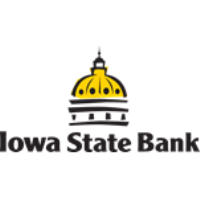