Million Women Mentors successfully hosted the National MWM Virtual Summit on Wednesday, October 13, 2021 for over 500 registered attendees. With a myriad of inspiring speakers, the attendees were able to hear about different initiatives currently going on locally, as well as success stories from many of the global partners.

Million Women Mentors (MWM) is an initiative of STEMconnector to spark the interest and confidence in women and girls to pursue STEM careers and leadership opportunities through the power of mentoring. The mission of the MWM network is to encourage girls and women to pursue, persist, and thrive in STEM careers.

“We are grateful to all our amazing members who give up their time to make the world a better place for others. Over the last seven years MWM has facilitated more than two million mentoring relationships, forever changing lives," said Dr. Jo Webber, CEO of Million Women Mentors.

To kick-off the MWM Summit, they heard from a STEM-studded panel of MWM Honorary State Chairs including Lieutenant Governor Bethany Hall-Long from Delaware, Senator Sharon Hewitt from Louisiana and State Representative Sylleste Davis from South Carolina, who all had successful STEM-related careers before running for office.

The MWM Summit also included several breakout sessions that attendees could choose from including MWM Women in Insurance Data Insights Driving Change, MWM Global-Turkey, and MWM State Leaders Best Practices.
In the MWM State Leaders Best Practices breakout session, attendees heard about different ways state leaders from Texas, Connecticut, and Delaware are building their mentoring network and what they did that proved successful.

After the breakouts, the final session included a video sharing those who had received the MWM Trailblazer awards for the year. The award winners and other MWM network members alike are truly great influences and MWM is lucky to have them as loyal mentoring advocates.

This year, the MWM State of the State Award was presented to the current active, volunteer State Leaders for their exceptional commitment to advancing opportunities for girls and women in STEM across their respective states. During this award presentation, MWM Iowa leader – Jana Rieker was recognized.

MWM National States Chair and Learning Blade CEO, Sheila Boyington remarked that “since launching MWM in 2014, the State Leaders and their Committees have played an integral part in activating and growing MWM across the country. We appreciate the volunteer State Leaders for their dedicated efforts that range from hosting events and speaking at conferences to writing statewide newsletters and sponsoring awards. They are honored for their work to put literally millions of girls and women on pathways to pursue, persist and succeed in STEM.”

While MWM wishes that the summit could have been in-person, they were grateful to all for adapting to the virtual space and joining them in the sharing of knowledge and impact on the STEM community.  They look forward to seeing everyone next time and are proud to partner with and support mentor efforts across the globe. 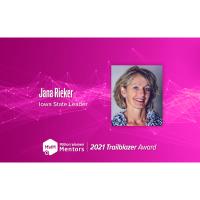